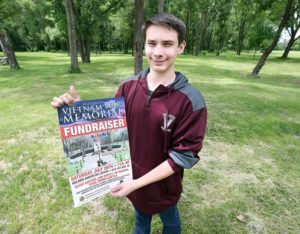 It was Memorial Day 2016, and something struck a chord in Jordan Briskey.

The Holmen teen had no personal ties to the military, and yet he felt bothered by the absence of a tribute to Vietnam veterans. Reaching out to the La Crosse Parks and Recreation department, he learned Veterans Freedom Park on Clinton Street was in development, and they were open to his idea. Encouraged by grandmother Sheryl Pederson, Briskey reached out to local veterans, visiting the Highground Veterans Memorial in Neillsville and meeting with its developer.

During the past two years, two monuments have been erected in Veterans Freedom Park, honoring Korean War and World War I veterans, and a tribute to World War II nurses is set to debut in July. The Vietnam Memorial is expected to be located in the green space adjacent to the nurses’ memorial.